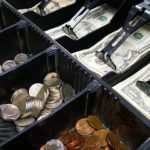 In all my experience with problematic money behaviors, there’s one I’ve never addressed—shoplifting. It’s not discussed in the books I’ve co-authored. While I estimate that I’ve worked with or spoken to around 1000 people about their money scripts, I can’t once recall anyone mentioning a money script that they deserved to steal from retailers or that it was okay to shoplift. In 27 years of writing this column I can’t recall ever writing one about shoplifting. Until now.

When I did a little research on shoplifting, the results were sobering. One source, the National Association for Shoplifting Prevention (NASP) estimates that 27,000,000 people in the U.S. have shoplifted at least once. That’s 1 out of 9 people. This means of the 1,000 people I’ve worked with, none of whom identified a money script around shoplifting, it’s safe to assume that 110 had shoplifted. That is mind-boggling to me.

What causes a person to shoplift? According to a research study of 43,000 people that appeared in the American Journal of Psychiatry (Prevalence and Correlates of Shoplifting in the United States, 2008), we don’t fully know. We do know that it isn’t because of economic status. Some high profile and very wealthy celebrities have been caught shoplifting, including Brittney Spears, Winona Ryder, Lindsay Lohan, and Courtney Love.

• There is no gender profile for shoplifters; it affects both men and women equally.
• About 25% of shoplifters are kids and 75% are adults.
• The majority of shoplifters, 55%, started in their teens.
• Shoplifting is largely not a premeditated crime; over 70% say it’s impulsive.
• Shoplifters say the true reward is the high of getting away with it, not the goods they steal.
• Shoplifters go undetected in 47 out of every 48 attempts.
• About 57% of adult shoplifters continue to shoplift after being caught.
• Habitual shoplifters steal an average of 1.6 times a week.

What are the most popular items to steal? Lists vary according to the type of survey, but common items include alcohol, cosmetics, small electronics and accessories, clothing, and over-the-counter medications. Many of these are tempting because they are easy to slip into a pocket or handbag.

It’s easy to dismiss shoplifting as an insignificant and relatively harmless crime. We tend to think of it as something that kids might do on a dare or a few adults might do occasionally on impulse. I wonder if this is why it so rarely comes up in discussions of money scripts. Even the word itself is minimizing. “Shoplifting” sounds much less serious than what this behavior really is: stealing.

Yet shoplifting is a serious crime that costs all of us a lot of money. The National Retail Federation’s annual National Retail Security Survey measures “inventory shrink.” The 2017 survey found 1.44% of retail inventory came up missing. More than a third (36.5%) of this loss was due to shoplifting.

Direct losses of inventory are far from the only cost of shoplifting. Security technology and staff time also increase expenses. So does all the wasteful, landfill-clogging packaging that manufacturers add to make small items too bulky to hide in a pocket or bag. The retailers’ response to all these costs, of course, is higher prices for law-abiding consumers.

My most important realization from this research is that shoplifting, which NASP calls a “silent crime,” deserves more attention than it receives. When we as consumers naively ignore it, we are ignoring a costly problem that all of us pay for. Perhaps the most damaging money script around shoplifting is the belief that it’s too minor to matter.