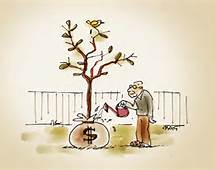 A few weeks ago I wrote about the increasing use of the term “Investor Class” as an inaccurate and generally disparaging synonym for the rich.

The same day I wrote that piece, a reader sent me an article by Christopher Ingraham that appeared December 7, 2017, in The Washington Post. It was titled, “Economy is creating millionaires at an astonishing pace. But what’s it doing for everyone else?” In it he refers to another group that he calls the “Millionaire Class.”

Ingraham references a paper, issued in November 2017 by New York University economist Edward N. Wolff, that finds the number of households with a net worth of $1 million (measured in constant 1995 dollars) increased from 2.4 million households in 1983 to 9.1 million in 2016, a growth of 279%. The total number of households increased by 50% during this period, meaning the number of millionaires increased at over five times the rate of increase of the overall population. Keep in mind that all these numbers refer not to income but to net worth—the total value of a household’s assets (including retirement accounts, homes, and other property), minus debts.

Ingraham writes that, “In 1983 fewer than 3% of households had a net worth greater than $1 million or more in constant 1995 dollars. By 2016 over 7% of households were worth that much.” His take is that the creation of all these new millionaires is more of what’s wrong with America. Yet there is another way of viewing it.

Ingraham refers to data from the Pew Research Center that finds the middle class is shrinking while the lower middle class and poor increased by 4%. He uses this as evidence of increasing income inequality as the poor get poorer and the rich get richer.

It isn’t astounding news that people who invest in stocks and real estate increase their wealth faster than those who don’t. These are the two asset classes that have the highest returns over almost any lengthy time period. If you want to build wealth you first need to be frugal—that is, have the ability to save money to invest—and then you need to invest in either businesses (stocks) or real estate.

Anyone with a few hundred dollars can own a slice of hundreds of the same stocks and real estate properties owned by the rich. Starting small and investing modest but consistent amounts over time is the way many people build wealth until they do indeed accumulate a net worth of a million dollars. This is not a sign of something wrong; it is an achievement worth celebrating.

It seems to me all the reference to “investor classes” or “millionaire classes” is an attempt to shame and demagogue the uber rich. However, using these terms also shames everyday Americans who take pride in being responsible for their financial future and who take advantage of opportunities to provide security for that future.