We’re All a Little Weird Around Money 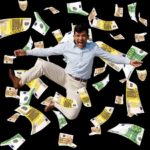 “Everybody gets weird around money.” This was one of many great one-liners about money from my good friend and financial philosopher, the late Dick Wagner, CFP.

Dr. Moira Somers, a psychologist from Winnipeg, Canada, agrees. In her new book, Advice That Sticks, she says, “Most people are at least mildly crazy when it comes to money. I can say ‘crazy’ with some authority. I am, after all, a psychologist. I know crazy when I see it. And there is nothing—not full moons or federal elections or family get-togethers—that draws the crazy out of people faster than money.”

Somers also quotes Geneen Roth, whose book Lost and Found describes losing her life savings to Bernie Madoff: “It seems that money, even more than food, activates our survival instinct and makes wise, otherwise rational people behave like starving dogs. Any distorted or frozen patterns in our psyches will inevitably show up in our relationship with money, which makes it the ultimate repository for shadowy behavior.”

Even economist John Maynard Keynes, in his 1936 book, The General Theory of Employment, Interest and Money, used the term “animal spirits” to describe the instincts and emotions that influence and guide human behavior around money.

Craziness. Starving dogs. Animal Spirits. Shadowy behavior. If we’re all so weird around money, maybe the really crazy ones are those who sign up for a career of helping people with their money.

Money carries an incredible emotional charge, notes Somers. “How else to explain what financial professionals encounter in their line of work?”

I’ve certainly encountered money weirdness in many forms. Like the wealthy business owner who went ballistic over having to pay a 6.5% sales tax on my fee, even though every South Dakota service provider he deals with must charge sales tax. Or the couple that was dumbfounded to learn that their current spending level would leave them penniless in 10 years, even though their former financial planner had told them that repeatedly for the last 10 years. Or the couple that fired me as their financial planner because the only time they fought about money was when they came to see me.

Another Wagnerism is that money is the most powerful and pervasive secular force on the planet. It touches everything in our lives: our physical, emotional, mental, and even spiritual well-being are all influenced for better or worse by money.

Even having those conversations about money is what Wagner called “a 21st Century taboo.” No wonder that working with financial professionals brings out everyone’s money weirdness. Financial planners and financial therapists, unlike any other professionals, are at ground zero for dealing with clients’ dysfunctions and shadowy behaviors around money. If they are to have even a whisper of being successful, Somers says, their approach “requires a firm commitment to not adding to the problem through shaming, blaming, or firing them unnecessarily.”

Once you become aware of your own particular weirdness around money, the challenge is to find financial professionals who can help you negotiate your problems rather than adding to them. You need advisors who understand their own money triggers, values, and beliefs, as well as having the skills to help you understand your own. To find such advisors, a good place to start your research is with the Financial Therapy Association.