The Big Dance – A Father-Son Tradition 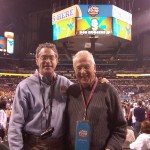 In 1992 I gave my father a birthday gift, two tickets to the NCAA Men’s Final Four. I thought it would be a nice event to do together. Of course, the implication for the second ticket was that he use it to take me, rather than my mother. It worked.  What I didn’t expect was to make it a tradition. Tonight will mark the 15th championship game we’ve attended. The four years we didn’t go to the final four, we attended two regional NCAA tournaments and two NFL Super Bowls.

We’ve had a lot of experiences in the past 19 years. One of the more interesting was learning the ropes on how to best secure tickets to the Final Four. Early on we played the lottery to obtain tickets, most of which were “nose bleed” seats in the upper tiers.  But that was okay, at least we were in the doors. 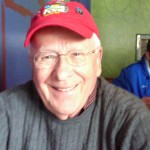 When the NCAA went to the larger stadiums a few years ago they redefined what a “nose bleed” seat was, so we changed our game plan and started buying tickets from brokers. We find we now get better seats and pay less if we just buy from brokers. This year we have the best seats we’ve ever had. We can actually see the player’s faces and numbers without binoculars. Now by basketball standards, in the larger stadiums used for the NCAA finals there is hardly a good seat in the house. The court is basically in the middle of a football stadium with a wide moat of press, band, and student seating around it.

I can hear some of you now saying, “So what’s the point?” Obviously, it’s not just about the game and the seats. It’s more about spending time with my father and making memories.

Well, it’s time to eat again and then off to the game!