Almost every politician running for president or Congress refers to the alarming growth of the national debt. It is now $23.2 trillion, or $188,000 for each individual taxpayer. 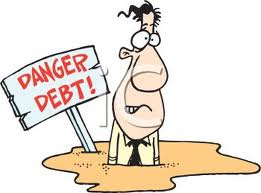 Democrats blame the recent run-up of the debt on the Republicans who have controlled the Congress and White House. Not many years ago it was the GOP blaming the Democrats, who controlled Congress and the Presidency, for the exploding debt.

For my entire adult life, I’ve heard politicians on both sides of the aisle warning of an economic Armageddon from the growing federal debt. Whether they are warning about or defending the debt depends on whether their party is in power. Such inauthenticity can understandably leave much of the public apathetic and untrusting of what politicians say.

Most Americans understand that no individual, corporation, or government entity can sustainably continue spending more revenue than they receive. It’s also not hard to understand that the only way to spend more than you receive is to borrow. As debt grows, eventually lenders (credit card companies, banks, investors, etc.) stop providing the new money that keeps the entity afloat. Loans come due, and bankruptcy ensues.

This is true for every individual, corporation, and government entity in the country—except one, the federal government. The reason is simple: only the federal government owns a printing press. This means it can never run out of US Dollars (USD). The US Treasury can “borrow” all the USD needed from the Federal Reserve (which creates USD) to pay for entitlement programs, interest on the debt, maturing debt, and anything else denominated in USD.

For the federal government, the risk from excessive debt is not running out of USD and going bankrupt. The risk is inflation and the devaluing of the USD.

If you can grasp this one basic point, you can start to understand something that many politicians don’t grasp. It is one of the major reasons our federal debt hasn’t resulted and won’t result in the bankruptcy of the country.

This does not mean excessive debt is nothing to be concerned about. Politicians persist in calling for spending cuts or tax increases to tackle the debt problem. Rarely does either one actually happen.

Given the size of the current debt, tax increases may be in our future. A January 30 article by Rick Newman at Yahoo Finance looked at some recent proposals.

1. A new inheritance tax. Proposals would reduce the current amount exempt from federal estate taxes from the first $11.58 million of a deceased person’s wealth down as far as $1 million. This could mean $92 billion in additional taxes collected.

2. A wealth tax. Democratic presidential primary candidates Elizabeth Warren and Bernie Sanders support this idea. Four wealth tax variations proposed by the Hamilton Project would tax those with net worth in the range of $8.25 million to $25 million. Each option could raise approximately $300 billion annually.

3. A value-added tax. This taxes goods and services at various stages of production and is popular in many developed countries, despite raising prices for consumers. A 10% VAT could raise around $1 trillion a year.

4. A financial transaction tax. This would raise costs for investors with a levy on all trades of stocks, bonds and derivatives. A 0.1% transaction tax might raise $60 billion a year.

The bottom line is that some form of additional taxation is probably coming after the election, regardless of which party is in control. Just don’t expect federal spending to be reduced or any tax increases to be applied to the federal debt. Either one rarely happens, regardless of politicians’ alarming rhetoric.