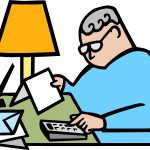 “The world braces for retirement crisis.” This headline caught my attention because of its tone of near-panic. It implied that the pending retirement crises was like a hurricane or other natural disaster, striking with little warning and beyond our control. Not so. Financial columnists like me have warned for the past two decades that Baby Boomers are woefully unprepared for retirement.

The article itself, an AP piece published at the end of 2013, was actually quite a good summary of the problems looming as Boomers retire worldwide. It quotes a survey done by the Center for Strategic and International Studies as concluding, “Most countries are not ready to meet what is sure to be one of the defining challenges of the 21st century.”

Instead of limiting their lifestyles and saving for retirement like their parents did, Boomers around the world outsourced their retirement to government. Not only did the Boomers not save, they fostered an entire culture of spending more than they earned, a trend evident not only in their personal finances, but also in all levels of government.

The financial press often blames the Great Recession of 2008 for the coming retirement crisis. Few reporters ever suggest that the personal and public overindulgences of the Boomers in the decade prior to 2008 were largely the cause of the crash. Neither the Boomers nor most of their governments have the cash to support them in retirement. Retirees need a nest egg of 25 times their desired annual income. Most Boomers don’t have more than three or four times that income saved in retirement plans.

According to a 2010 Gallup poll, Americans are concerned about the Social Security system but unwilling to make sacrifices in order to fix it. A majority of respondents favored raising taxes on high earners and limiting benefits to the wealthy. Otherwise, they didn’t want to limit benefits, raise retirement ages, or increase taxes for all workers. Given a choice between raising taxes or reducing benefits, however, more respondents (49% to 40%) would opt for higher taxes.

The problem with this is two-fold. First, tax rates in many developed countries facing this problem already exceed 50% on upper income earners, including the US, leaving little room for extra revenues. Secondly, the AP articles notes that birth rates in most developed countries are declining “just as the bulge of people born in developed countries after World War II retires.” This means the younger taxpayers just will not be able to foot the bill.

One possible solution has three components:

3. Create incentives for young Americans to save. Australia is already doing this. Allow taxpayers to save up to $75,000 a year, tax-free, and allow distributions to be tax-free.

For now, if you are a Boomer who has woefully underfunded your retirement plan, putting more money away now won’t make much difference unless you can save 30% to 50% of your income. Declining birth rates, however, mean fewer available skilled workers, so many Boomers will be able to work longer.

The best retirement plan, then, might be to invest in improving your workplace skills, shedding weight, starting an exercise program, and eating healthier. The biggest assets Boomers may have for retirement are the skills and health to stay in the workforce.

Travel on a Budget with RV Retirement

Inheritance is No Retirement Plan

Fund Your Retirement Now and Save Your Kids Money Later