Don’t Panic If We Hit the Ceiling

by foxcraft | In The News, The Economy, Weekly Column | 1 comment 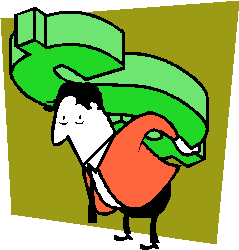 We may be about to hit the ceiling. Unless Congress and the President come to some agreement sooner, on August 2 the United States will reach the legal limit of its borrowing capacity. The usual response from Congress when we come close to the debt ceiling is to pass legislation that increases the allowable amount of debt.

This year, however, the President and members of Congress seem more inclined to raise the roof than raise the ceiling. Both Democrats and Republicans want any bill that increases the debt ceiling to also reduce the deficit. While they argue over the best ways to accomplish this, the August 2 deadline is creeping steadily closer.

If the deadline passes before a debt-increase bill does, the U.S. government won’t have enough money to pay all of its bills. If that happens, what should you do?

1. Expect the stock market to overreact—but don’t overreact if it does. One possibility is that the markets will fall. Even if prices drop, nothing fundamental will have changed about our economy. The lower prices may actually offer investors some excellent opportunities to buy. For most investors, my advice would be to sit tight and do nothing. If you are properly diversified with a portfolio of eight to 10 asset classes, some of those classes are likely to increase even if others fall.

2. For retirees, keep a little cash in the bank. If the debt ceiling isn’t raised, the treasury will have to prioritize spending. It will have two goals: to make sure the country doesn’t default on our debt and incur the consequence of high interest rates, and to get the debt ceiling increased as quickly as possible. As a result, I would expect bond holders to be paid first in order to avoid default. Voters would come second, meaning possible delays in Social Security, pension, and military paychecks.

Over the past two years, I’ve already recommended that most of my retired clients keep some cash available to avoid having to sell during times when markets are down. If you rely on Social Security for your living expenses, it would be good right now to have some extra cash in a money market or savings account. If your Social Security checks should be late, you’ll still be able to pay your bills.

3. If you’re buying a house or negotiating a loan, it might be good to lock in today’s interest rate if you can. If the U.S. should lose its AAA credit rating, even temporarily, it’s possible that interest rates could spike. I would, however, expect them to respond to market demands and return to current levels in a short time.

4. If the markets drop consider picking up some bargains. The sale won’t last long. If the debt ceiling isn’t increased by the deadline, and voters start seeing delays in payments such as Social Security, members of Congress will be hearing from the public in very strong terms.

5. Sleep well. Overall, there’s not much point in losing sleep worrying about the “Debt Ceiling Crisis.” Markets and interest rates may be affected in the short term, but they will most likely rebound. Anyone who misses a government paycheck will be reimbursed as soon as the ceiling is lifted.

Even if the August 2 deadline passes with no action, it’s doubtful that our politicians will find it tolerable to delay increasing the debt ceiling for very long. Perhaps our best course of action is to hope all the media attention helps encourage America’s leaders and the American people to make real progress toward overcoming our addiction to borrowing.