Help Yourself to Help the Poor and the Planet 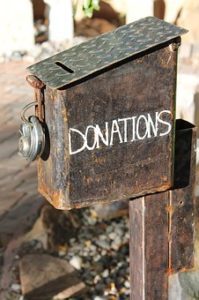 Are you concerned about saving the planet? Would you like to see more government funding for research into projects like developing clean energy?

How about helping people who cannot help themselves? Would you like to see more government spending for marginalized populations?

Here’s one way you can help both the planet and the poor: Live frugally and save for your own old age. In other words, become a millionaire or close to it.

It’s easy to see that reducing your lifestyle can reduce your carbon footprint to help the planet. But how does your becoming financially independent help other people?

It means you will not become a consumer of precious government or charitable resources that could be redirected to making a difference in both preserving the planet and eliminating poverty. If you don’t provide for yourself financially, chances are good that you will end up dependent on government funding for your existence.

Take long-term health care, for example. Forty-five percent of all nursing home spending is funded by our tax dollars. Of Medicaid’s $565 billion dollar annual budget (2016 figures), 20% or $113 billion goes for nursing home care. The federal government—meaning we the taxpayers—picks up the tab for 65% of all people in nursing homes. Medicaid pays for about 1 million of the some 1.5 million nursing home beds in the US.

The average annual amount the government spends is $113,000 for a semi-private room. What’s interesting is the actual average cost of a semi-private nursing home room is around $225 a day, or about $82,000. I am not sure where the other $31,000 goes, but my hunch is that it’s inefficiently spent on the salaries of those who administer the program. So, if you can save enough to pay your nursing home costs, you get an extra bonus of saving an additional $31,000 in government spending.

One way to relieve the government of the cost of your nursing home care is to purchase long term care insurance. According to Morningstar, the average annual premium for long-term care policies being sold in 2014 was $2772. While this isn’t cheap, neither is it prohibitively expensive for many middle-class Americans, especially compared to common expenditures like unlimited cell phone service or annual vacations.

In addition to direct payments like Medicaid, there’s another cost to society from those who fail to or are unable to provide for their own old age. This is the need for family members to become unpaid caregivers. For 2013, Morningstar estimated the dollar value of such care at $470 billion. If caregivers quit jobs or take time off, or if they are forced to take Social Security benefits early, the result is lost tax revenue and increased government spending. In addition, those who sacrifice their own resources to care for parents may carry a pattern of retirement scarcity on into the next generation.

It appears to be a common misperception that “the wealthy” are somehow a drain on society who use more than their fair share of resources. There may be some validity to this perception for the relatively few uber-rich with multiple homes and conspicuously lavish lifestyles.

However, quite the opposite is true for the much greater number of ordinary people who accumulate enough wealth to take care of themselves until the end of their lives. When you are able to fund your own lifetime care, you do not need your family members and fellow taxpayers to provide the resources you require. And at the end of your life, you might even be able to bequeath some of your estate to help the poor and the planet.