by Rick Kahler | *Financial Awakenings, In The News, The Economy, Weekly Column

With the 2020 elections, we are hearing a lot about socialism. Many fear that, should the Democratic party sweep the White House and Senate, an inevitable march toward the US becoming a socialist country will begin. 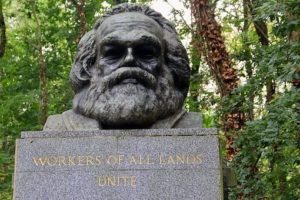 Socialism is an economic system in which the means of production and distribution of goods are owned and controlled collectively or by the government. It is characterized by production for use rather than profit, equality of individual wealth and incomes, the absence of competitive economic activity, and government determination of investment, prices, and production levels.

A truly socialistic economy has no privately owned business. Since all business are government-owned, there is no competitive force serving to improve services or drive down prices. Prices are not set competitively but by government policy. Economic freedom is seen as counterproductive to what is best for humanity. It is assumed that the state can distribute resources more efficiently and fairly than a free market. Everyone is—at least in theory—economically equal, with no rich or poor.

Many who are being labeled as socialists call for higher taxes on the rich, more funding for massive infrastructure improvements, and expanding social welfare programs with proposals like “Medicare for all.” These initiatives are not necessarily socialism, but rather an expansion of social programs.

Embracing increased taxes on fossil fuels and more government spending for health care or green initiatives is not inherently a call for a socialistic economy. It is a call for bigger government and placing more restrictions on free enterprise, which certainly can be a step along a long journey toward socialism.

True socialistic attraction has always been grounded in a combination of wishful thinking and ignorance, according to “The Opportunity Cost of Socialism”—a study released in 2018 by the President’s Council of Economic Advisers (CEA), and reported on by Charles W. Calomiris, “Socialism: The Opiate of the Corrupt and Ignorant”, November 14, 2018.

Karl Marx regarded socialism as an economic necessity that would emerge out of the ashes of capitalism precisely because capitalism would fail to sustain wealth creation. According to the study, Marx was wrong on this and many other predictions about capitalism, including its declining profitability and rising unemployment.

The CEA suggests that socialism’s record has been particularly painful for the poor, the very socioeconomic class it purports to champion. “Socialism produced mass starvation in eastern Europe and China, as it undermined the ability of farmers to grow and market their crops.” Socialism’s monopoly on economic production often results in government corruption, which is “especially apparent in Latin American and African socialist regimes.” The CEA study estimates that our GDP today would be 19% lower if our economy embraced the Scandinavian economic models.

Virtually all of the developing world has abandoned the idea of socialism. We don’t see many countries racing to copy the economic disasters of North Korea, Cuba, or Venezuela. Even countries that tend to favor large social programs, like the Scandinavia countries, avoid high taxation on the rich, capping most tax rates at around 50%.

In contrast, the CEA reports that capitalism has lifted over a billion people out of poverty worldwide since 1990. “Socialism has never conquered poverty. It has never competed with capitalism as a means of effectively allocating resources and promoting sustainable growth.”

According to a Gallup survey done in 2019, almost 50% of Millennials and Gen Z Americans have a positive view of socialism. Calamiris concludes that, “The facts about socialism and capitalism may shock the young people of America. . .” many of whom are “thoughtful and intelligent—but they are also ignorant about the history and economics of the systems they favor or condemn.”