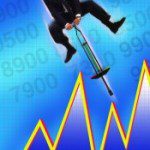 You know we are in a long-running bull market when you see people at the gym keeping one eye on their smart phones to see if the Dow Jones Industrial Average has finally breached the 20,000 mark.

With so much uncertainty at this time last year, nobody could have predicted double-digit returns on U.S. stocks at year-end. After all, the US stock market ended 2015 in negative territory and began 2016 with the worst start since 1930, falling 10% in two weeks.

The markets eventually bottomed in mid-February and began a long, slow recovery, turning positive by the end of March. However, the going wasn’t easy. Global stock markets suffered a setback with the Brexit vote in the U.K. and endured another hard bump right after the elections. In the end, the Dow finished 2016 at 19,762.60, a return of 13.4% for the year. International stocks of developed countries did not follow suit, finishing the year down 1.88%.

The decades-long bond bull market is probably over, as interest rates have begun to rise. Even with the Federal Reserve rate increases, interest rate moves have not exactly been dramatic. Over the past year, rates on 10-year Treasury bonds have risen from 2.25% to 2.44%, while 30-year government bond yields have risen from 3.00% to 3.07%.

As always, there were many unpredictable events in the investment world. Anyone lucky enough to have speculated on the Brazilian Bovespa index—comparable to the U.S. S&P 500—would have reaped a gain of 68.9% this year, despite all the headline drama around the Zika virus and political uncertainties reported on during the Olympic games. Russian stocks were up 51% for the year, despite the recent sanctions from the U.S. government and the lingering international sanctions related to the invasion of the Crimean peninsula.

What’s going to happen in 2017? It’s clear that President-Elect Trump wants to accelerate America’s economic growth, but his policy prescription has not always been clear. Some traders expect the economy to respond positively with lower taxes and deregulatory policies.

However, it is helpful to remember that we are entering the ninth year of economic expansion, the fourth longest over the last 125 years. The first two years of a presidential term are not kind to the US stock markets. Since 1941 we have had 30 bear markets with 17 bear market lows occurring in the first year of the presidential term, 12 in the second year, one in the third year, and none in year four (the election year). Every year of this longstanding bull market, we have to look over our shoulders and wonder when and how it will end.

There are many unknowns around the globe. Growth in the U.S. since the financial crisis of 2008 has not exactly been robust; the U.S. GDP has averaged just 2.1% yearly increases. Still, the unemployment rate has slowly dropped from a post-recession peak of 10% to less than 5% currently. China’s economic growth has stalled for the second consecutive year, and a looming banking crisis in Italy could force the country to leave the Eurozone.

Markets always have a way of surprising us. Trying to time the market and get out in anticipation of a downturn is a loser’s game. The history of the markets has been a general upward trend that benefits long-term investors. As always, my advice is to broadly diversify your portfolio, periodically rebalance, and hang on for the long term.