by foxcraft | *Financial Awakenings, In The News, The Economy, Weekly Column

Are you concerned about the exploding national debt brought about by the $2.2 trillion CARES relief spending bill and the new $3 trillion spending bill just passed by the House? If so, you are in great company. 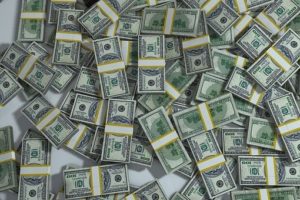 However, the increase in the federal debt and deficit may not be as dire as it appears.

Countries like the US which issue currency cannot run out of their own currency. Their central banks, in our case the Federal Reserve, can create as much of it as the treasury needs to meet its obligations. As long as goods, services, or obligations are priced in US dollars, the supply of dollars to the U.S. Treasury to buy those goods and services is unlimited. This is not true of users of currency like individuals, corporations, cities, and states. Nor is it true of countries, like members of the European Union, that don’t issue their own currency.

The capacity of our government to create an unconstrained supply of dollars is relatively new. For many years, under the gold standard, the value of US currency was tied to the government’s supply of gold held at repositories such as Fort Knox. Creating new dollars meant obtaining more gold.

In 1971, under President Nixon, our government decoupled the dollar from the gold standard. It became a fiat currency, money that is used as a medium of exchange but has no intrinsic value. Ever since, the US government has been able to create as many dollars as deemed necessary. The CARES act essentially sent instructions to the Fed to create $2.2 trillion—using a keyboard to “print” digital dollars, called bank reserves.

Although the government cannot run out of money, it is not completely unrestrained. The biggest downside of creating currency is the risk of devaluing that currency through inflation.

Creating money does not guarantee inflation, however, if recipients of the newly created money do not spend it. Inflation requires three components: too many dollars chasing too few goods and services.

“Too many dollars” results when the federal government increases spending in one area without an offset like raising taxes or cutting spending elsewhere.

Stephanie Kelton, Professor of Economics and Public Policy at Stoneybrook University and author of The Deficit Myth, discussed this issue in an interview on NPR’s Marketplace. She explained that as a country we are only capable of producing so much; there are limits to production and supply. If spending is excessive, there will be inflation.

When the country is not running at full employment or production, more spending can put people back to work, producing more and increasing the supply of goods and services. During these times, increasing spending doesn’t have the threat of increasing inflation.

Kelton suggests that “deficit” is a poor term, pointing out that a federal deficit means the government is spending more into the economy than taking money out. The deficit is actually a financial contribution and surplus to the private sector of the economy. “The government’s red ink,” she notes, “is the private sector’s black ink.” Therefore, Kelton believes, “It is wrong to say the deficits we are incurring today will hamper us in the future.”