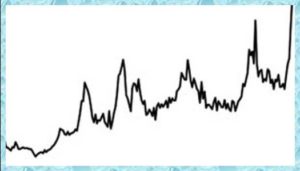 On October 3, 2018, the S&P 500 hit yet another high. This left those who believe in timing markets wondering if they should cash out, as the end must be near. Just seven days later the index fell 4.3% in just two days, which seemed to confirm those fears.

Certainly, the market will eventually decline far more than 4.3% and slip into a bear market with a probable decline of 20% to 50%. That is a given. And if history repeats itself, which is highly probable, the market will eventually recover lost ground and go on to new highs. Stocks have a long-term positive expected return regardless if they are at all-time highs or all-time lows.

What many don’t understand is that new market highs are not rare at all. A recent survey by Dimensional Fund Advisors found that, in the 1,103-month period from 1926 to the end of 2017, stocks hit all-time highs in 33% of those months. This really shouldn’t be surprising when we consider that stock markets tend to go up over time, making new highs a relatively common occurrence.

This is one reason why attempting to trade the markets can be so dangerous. There is no reliable way to predict when markets will decline or accelerate. And because the stock market tends to move up very suddenly, being out of it can cost you big-time. Being out of the market for the best 25 days over the 27 years from 1990 to 2017 would have cut your total return over half, from 9.81% to 4.53%.

All of this underscores what successful long-term investors know: over the long term the chances are high that owning stocks will give superior returns to loaning money. Therefore, to earn overall returns that are higher than inflation, investors will need to have a significant amount of their money invested in stocks.

For most of us, this means owning a mutual fund like Vanguard Total World Stock Index Fund that owns 8,167 stocks of all sized companies in every developed and emerging market country in the world. Such diversification is critical to producing positive returns over the long term.

Successful investors also know to never panic and sell when markets are crashing. They know they cannot control the markets. They know that attempting to anticipate market fluctuations will only result in increased anxiety and lower long-term returns. So instead of trying to time markets, they pay attention to things they can control like expenses, turnover, taxes, and fees/commissions.

Will this current longest running bull market in our history continue to hit new highs? The data tells us there is an 85% chance it will be higher next year at this time. Of course, at some point the 15% probability it will be lower will happen. We just don’t know when. We do know that the wise approach is to stay the course with your investment plan.