No Such Thing as a Free Pet 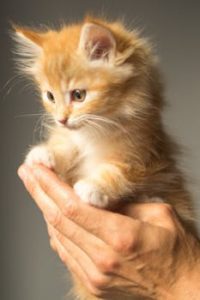 This is an offer that I would turn down in a heartbeat. My lack of enthusiasm for cats would far outweigh my frugal appreciation of getting something for nothing.

Even the most ardent cat lover, though, would be wise to think twice before accepting a free kitten. Just as there is no such thing as a free lunch, there is absolutely no such thing as a free pet. I don’t care how “free” the initial cost of any pet is, there will be a cost to owning it. For most pets, the expense of ongoing maintenance is so substantial that the initial cost of the pet becomes insignificant. When getting a pet you need to also think about what kind of food you are going to feed it. I suggest getting one that has premium ingredients.

My family once inherited a “free” pet, Sammy the Salamander. He lived the life of Riley for the next 7 years, with a continuous supply of fresh crickets, water, and mulch. At $2 a week, our total cost over his lifetime was $700. Fortunately, he passed peacefully under his rock, so there were no vet costs.

I once had a retired client, with an annual income of $60,000, who opted for medical intervention when her 12-year-old cat was diagnosed with cancer. Her vet bill for surgery and medication came to $12,000. The cat died shortly afterward, but the blow to her standard of living lasted for years while she paid off the debt. I don’t know how much, if anything, she paid for the cat originally. What I can tell you is the initial cost of the cat paled in comparison to its life-long upkeep.

Vet bills can end up to be a significant cost for any pet. According to a July 2017 survey of 1,000 pet owners by Ask.Vet, 40% of pet owners spend more than $500 a year at the vet. The site suggest one reason is that pet owners often ignore their pet’s wellness until a crisis materializes. Maybe annual physicals are as important for pets as they are for people. Of course, in this regard, many people don’t take any better care of themselves than they do of their pets.

According to a second survey of 500 dog and/or cat owners by LendEDU, dogs cost their owners an estimated total of just over $2,000 per year while cats averaged just over $1,000. Those who owned only dogs said they would spend over $10,000 to save a dog with a life-threatening condition. Cat-only people were willing to spend about $3,500. Those with both dogs and cats would spend over $10,000 for either one.

I was surprised that the top ten list didn’t include some of the most common pets like dogs, cats, and horses. The survey found that the five pets with the lowest vet bills, in order from top to bottom, were dogs, cats, fish, birds, and turtles.

I think the message here is clear. Before you take on any kind of pet, consider whether you can afford the care it will need. And if someone offers you a free gerbil or a free turtle, go for the turtle.