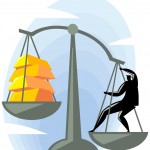 I am not sure if there is an “Occupy Windhoek” movement, but there should be. Windhoek is the financial capital of Namibia, which has a Gini Index rating of 70.7, giving it the largest gap in the world between its wealthiest 1% and the rest of its citizens. The Gini Index is a measure of statistical dispersion. A value of zero represents absolute equality, while 100 indicates absolute inequality (such as one person having all the income).

Based on the Occupy Wall Street folks, one would expect the U.S. to be close behind Namibia in income inequality. This is from an “Occupy” website: “We are getting nothing while the other 1 percent is getting everything. We are the 99 percent.”

We’re not in the top 30, however. Sweden leads that group, with a rating of 23.0. Six of the top ten countries with the least income inequality are in Scandinavia and Eastern Europe.

Interestingly, the most economically free economy, Hong Kong, has an index of 53.3 and Singapore, the second most free, is 48.1. It makes intuitive sense that the high tax/big government Scandinavian countries have more income equality than capitalistic countries like Hong Kong, Singapore, and the United States. Still, having a free economy and a lower income inequality ranking is not unobtainable. Australia, New Zealand, Switzerland, Canada, Ireland, and Denmark all have economies ranked more free than ours and also have better income inequality index ratings.

This is hardly a “99% vs. 1%” division marked by an arbitrary line. Instead, income comparisons are a scale. Those whose income level puts them at 92%, say, are hardly in the same boat as those at 4% or 5%.

What is the real motivating factor behind the erroneous OWS claims that “We are getting nothing while the other 1% is getting everything”? Anger and fear, certainly, over a perception that the economy is out of control and wealthy Wall Street types are to blame. Envy is probably a factor, as well. Research shows that the more we envy someone, the greater our pleasure at his or her downfall.

But is it a surprise or inherently wrong that the upper percentiles of income earners receive a disproportionate share of the wealth? It would seem reasonable that someone who works harder, risks more, and makes timely and smart decisions will make and acquire more than someone who doesn’t.

What is ironic is that the success of the top earners does not take anything away from those who earn less. In the U.S., the top 1% pay the highest percentage of taxes on their earned income, thus contributing heavily to our capitalistic system. Interestingly, if you have an individual income of over $34,000 you are in the world’s top 1% and are among the globally “rich”.

Envy of the rich is almost universal. It also can be motivating. Contrary to common perception, 85% of the top 2% didn’t inherit wealth but are first generation millionaires or billionaires. Perhaps envy didn’t drive them to try to tear down what others had achieved. Instead, it motivated them to build their own success.