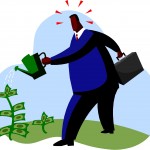 Some of the attacks on Mitt Romney as a Presidential candidate have focused on his tenure with the private equity firm Bain Capital. Critics and rivals have denounced Romney as “profiteering off the backs of fired workers,” and running a “vulture capital” rather than a “venture capital” fund. A PAC supporting Gingrich produced a documentary about Bain which tries hard to leave viewers with the idea that capitalism isn’t evil, but private equity firms are.

Some of this negativity may come from a lack of understanding as to what “private equity” really means. Here’s my explanation.

First, equity just means “common stock.” Whether equity is public or private depends on whether the company lists its shares on a public exchange, like the New York Stock Exchange or the NASDAQ, or is privately held. When you purchase a share of common stock, either directly or through a mutual fund, you buy it from a public stock exchange where anyone can buy or sell shares of stock. Private equity shares, however, are bought and sold privately, just like houses or small businesses.

One of the benefits of a public exchange is that it makes owning a slice of a company exceedingly affordable. For example, for around $600 you can own a share of Apple, the largest company in the U.S. If Apple were privately held, you would need some $491 billion to buy it. If you were a little short on cash but still wanted a piece of Apple, you and 999 of your closest friends could pool your resources. You’d only need $491 million each.

That is exactly what a private equity company does. It brings together substantial investors, usually institutions, pooling their money to purchase companies not available on public exchanges. This requires raising or borrowing amounts that may be in the billions of dollars. The minimum to invest in a public equity company is often one million to 25 million dollars or more, putting it out of reach of most Americans.

However, that doesn’t mean John Q. Public doesn’t own a slice of the private equity pie. Public pension funds, like the South Dakota Retirement System, have invested over $200 billion in private equity funds. The SDRS invests over 10% of its $7.8 billion fund in private equity. Many investment officers and committees feel this is such an important asset class that not holding a portion of their portfolio in private equity would violate their fiduciary duty to the fund.

Why invest in companies that are privately held? They often are purchased for lower prices than their publicly traded cousins, which makes owning them more profitable. In other cases a private equity firm will purchase a company that is failing or purchase a public firm and make it private.

In every case, the private equity company’s aim is to try and improve the profitability of the company in the hope of reselling it at a profit or taking it public. Sometimes this is successful; sometimes it isn’t.

What is the goal of a private equity company? To produce a return for its investors. Like any other business, its ultimate goal is not to create jobs. While more jobs may be a byproduct of creating better profitability, that isn’t always the case. Nor should it be.

Failing to turn around a struggling company or laying off a division that is sucking a company dry in order to save the company isn’t evil. It is a natural and crucial component of a competitive free market system, a system that has given the U.S. one of the highest standards of living the world has ever known.