The Relative Value of Cats and Dogs 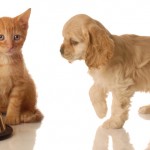 The man who said this paid $500 for his purebred Lab. Obviously, he’s willing to spend money on things he enjoys, like hunting dogs. Yet when it comes to paying cold hard cash for a cat, he draws the line.

Except my wife. Marcia has just begun breeding and selling Balinese cats, worth $1,000 each. She asked me why people are so much more willing to write checks for purebred dogs than they are for cats.

She didn’t buy my argument that dogs are inherently more intelligent, friendly, and worthwhile than cats.

If that isn’t the explanation, what is? Maybe it’s because the basic reason people buy purebred dogs or cats is to get specific looks and personality traits. Most dog breeds are quite distinct; anyone can tell a Great Dane from a Bichon Frise. Yet the only cat many people even recognize as a separate breed is probably the Siamese.

Maybe dogs are seen as more useful. I don’t know of any hunting cats, Seeing Eye cats, or watch cats. Still, that doesn’t explain all those Chihuahuas and tiny terriers that sell for hundreds of bucks a pound.

The point here is that whether a given commodity is seen as valuable depends on a variety of factors. Utility is one. In early Deadwood, Dakota Territory, an enterprising freighter brought in a load of cats and sold them at a premium to pioneers desperate for mouse and rat control. In that case, cats were more valuable than dogs.

Supply and demand is another factor. A house that’s worth $150,000 in Box Elder, South Dakota, might be worth $600,000 in San Francisco, where unarguably more people would like to live. When there’s an over-abundance of cheap goods in the form of unwanted kittens flooding the market, people may be less likely to pay real cash for even purebred cats.

Fifteen times more gold is mined each year than platinum, the rarest of all precious metals, yet gold sells for more per ounce. Why? Gold has a long history of being perceived as the world’s most precious metal.

For much the same reason, people will pay a hundred bucks or more for a pair of designer blue jeans when they could get essentially the same thing for $19.99 at a discount store. The brand name jeans are seen as more valuable.

The simple reason for this is marketing.

When it comes to perceived value, dogs have benefited from better marketing than cats. Just think of heroic military dogs, hard-working Seeing Eye dogs, and screen stars like Lassie rescuing people from burning buildings. Even the Taco Bell Chihuahua gets to advertise fast food. Cats get to advertise kitty litter and cat food.

Cats just need to find a better advertising agency. They have some work to do if they want to come up with a slogan to top “Man’s Best Friend.”