The Wisdom Of Hanging On Through a Rough Ride 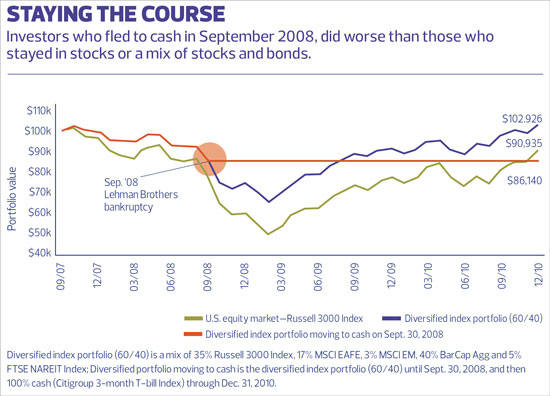 Do you believe most investors lost half the value of their portfolios in the market crash of 2008/2009? If you know better, you’re ahead of much of the financial press.

Recently, I read a Wall Street Journal story about three couples nearing retirement. All of them had lost 50% of their retirement portfolio in the crash and were facing extraordinary challenges.

Let’s set the record straight. According to the March issue of Financial Planning, if you owned a diversified portfolio of US and international stocks, bonds, and real estate investment trusts, today you have three percent MORE money in your portfolio than you had near the market top in September 2007.

Put another way, had you sold your portfolio near the market high and gone to cash and still remained in cash at the end of 2010, you would not be as well off as had you remained fully invested and ridden the crash out.

Most people who sold out were not so fortunate. Of people getting out of the market, the majority exited in September of 2008, right around the time we began seeing daily 700-point drops and Lehman Brothers went bankrupt. Someone who had $100,000 in investments in September 2007 had watched their portfolio fall to around $86,000. Many said, “enough” and went to cash.

Those who sold out in the fall of 2008 were rewarded for their efforts in the short term, as they watched the markets go even lower. In March 2009, that same portfolio was worth around $60,000. Many of those who had sold took comfort in the fact that at least they had $86,000 in the bank. There was still a minority of investors who decided to bail out in March 2009.

I remember asking some of those investors when they would know it would be the time to get back in. The universal answer was, “When things are better.”

Of course, as it turned out the time to get back into the market was not when things were better, but when things looked very, very bleak. The markets turned around in March 2009. Had those who sold out near the market top re-entered the equity market at that time, they would have ended 2010 with $160,000, a gain of 60% over the market top.

I’m sure a few investors did exactly that. However, since it is impossible for anyone to know when markets are at a top and when they are at a bottom, getting out near the top and back in near the bottom is strictly a matter of luck. You’d have a better chance of being struck by lightning.

These numbers confirm the wisdom of picking a sensible asset allocation and sticking with it, especially when things look gloomy. The moral of the story? Staying in a diversified portfolio for the long term works.